News
NEWS
The number of air navigation surged! Cancellation of voyage before the Spring Festival is the top seven times the epidemic situation


It is reported that the latest data from Xeneta shows that before the Spring Festival in China, the number of voyages canceled by the shipping company was more than seven times in the same period of 2019, which obviously showed that the demand weakened the container shipping industry. According to Xeneta, this may be just the tip of the iceberg, because the current data only counts the pre -holiday voyage announced by the carrier before January 6, and there is still some time before the Lunar New Year.

The agency pointed out that within the holidays, the shipping company canceled 220,000 TEU capacity on the route, which was significantly increased significantly compared to the 30,000 TEU in the same period in 2019. Other major routes are also affected. The number of blank navigants on the Asian-Nordic trade route increased by 715%compared with the same period of 2019, and currently 226,000 TEUs; Essence

"This does indicate that the current industry demand is very low. In normal years, as the shipper supplements the inventory, we often see that there are few empty ships before the consignor supplement the inventory. This is a worrying development for the shipping company, and it may be a bad sign of the next year. "

The capacity of the week of the Spring Festival holiday has also decreased. The currently announced capacity of the Asian -Western West route is 57,970teu. Sand pointed out that these numbers may increase before January 22. 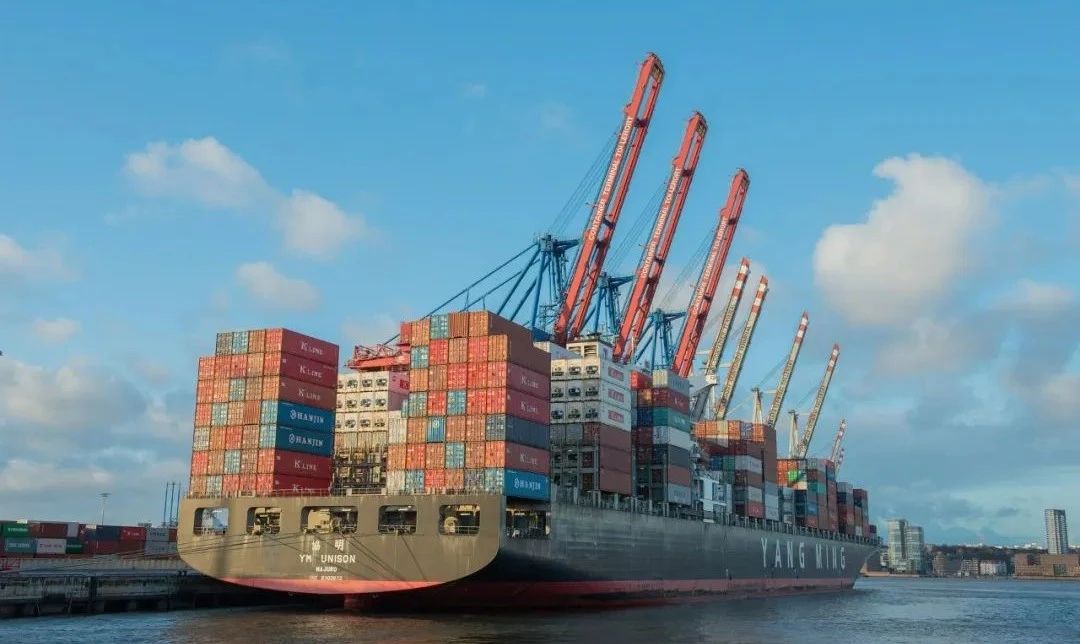 "In the next four weeks, the shipping company usually limits the number of navigation according to the decline in China's manufacturing and subsequent exports. At present, during the period after the New Year, the blank ship's capacity announced is about 68,000 TEUs. In fact It is less than 2019. But the shipping company has enough time to remove more capacity, so the total capacity that is expected to be canceled this year will exceed 2019. "

For example, after the statistics of Masky and MSC, after January 6, it announced a blank navigation on multiple routes. On January 12, Maski notified that in order to better adjust its Asian-North American route service timetable and respond to demand fluctuations, the following voyage will be canceled: 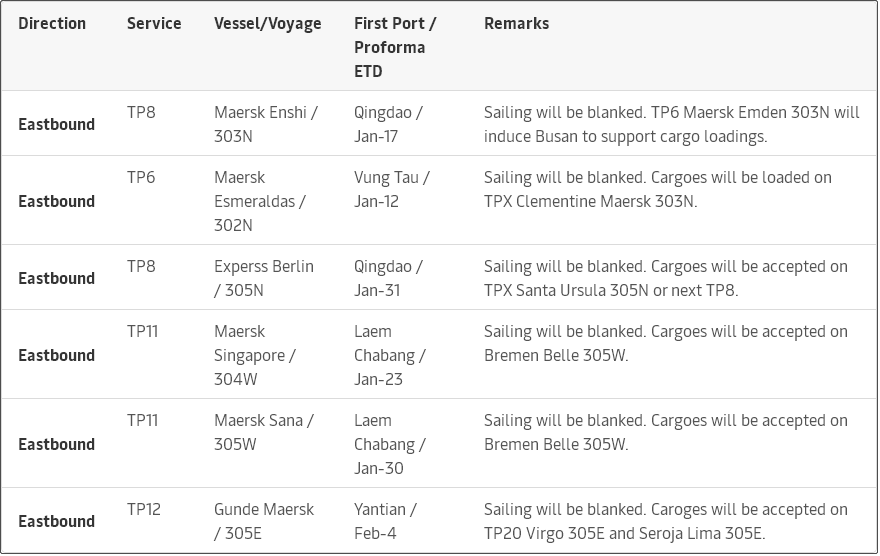 In addition, Xeneta's analysis showed that the number of blank voyages was actually much more. However, as Sand pointed out, it was a special case last year. "The current level is about half of the capacity that canceled around the New Year in 2022. However, this was because the global supply chain was facing tremendous pressure at that time, and the lack of equipment caused by the derailment of the sailing timetable. In some cases, the ship company was forced to be forced The extension of the round trip time makes the ship cannot return to the next time to return to the next time. "

"The situation is very different this year. This is a clear problem of demand. We can compete for business from the shipping company, and the shipping costs continue to see this, rather than congestion, epidemic, or any other 'structural' challenges."

In addition, according to the missing tracking data released by Druori, in major routes such as cross -Pacific, Asia to Northern Europe, and the Mediterranean, during the 2nd to 6th week of 2023, 149 of the 707 scheduled voyages were announced to be canceled. The cancellation rate is 21%. 58%of the blank voyages will occur on the cross -Pacific route, 31%occur in Asia to Europe and the Mediterranean routes, and 11%occur in the cross -Great Westward route.

During this period, the three major alliances announced that a total of 117 voyages were canceled, of which the Alliance was canceled 54 times, and the Ocean Union and the 2M Alliance were canceled 46 and 17 times, respectively. 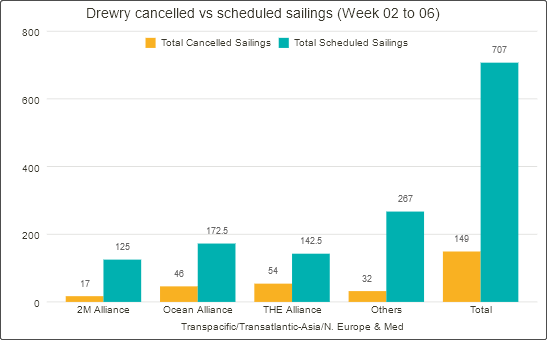 Druori reports that the peak of freight before the Chinese Lunar New Year failed to reach its historical level. The market is expected to have excess capacity in 2023, and the shipping company will continue to cancel more navigation.