The ship was stranded at the entrance of the Port of Jiaojo, which caused all ships to enter and exit the port. The port of Jiao Ya Luo is the largest port of Italian container throughput. It is also the sixth largest port in the Mediterranean. It is the main transfer hub in the region. 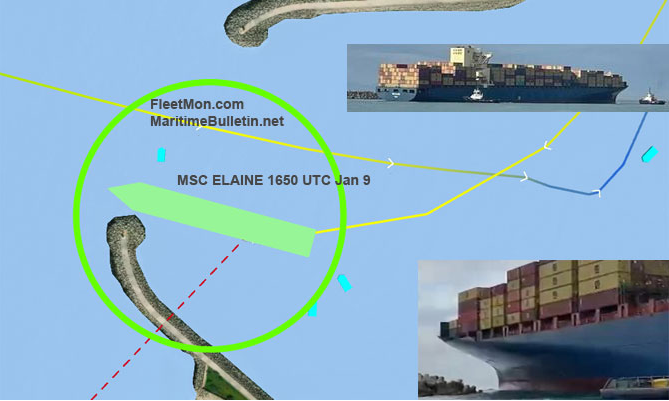 According to preliminary reports, no crew was injured or oil leakage, but the damage to the ship was unknown.

Local media reports said that after the incident, the local authorities were performing rescue operations all night. After several hours of efforts, the five trailers had not trapped the ship.

According to the latest news, the Italian Coast Guard confirmed that the next day's rescue operation benefited from harsh weather conditions and wind power, and all port trailers provided further driving forces to "break free" from the port of the port of the port to make it come out.

The Italian Coast Guard said that the entrance of the port was no longer blocked by the large container ship. Considering the weather conditions, the ship went to the Bo Pier after getting rid of it to receive all the necessary technical inspections.

It is understood that the ship serves the INDUS Express service of MSC, and the next port is the port of Marsaxlokk. According to the data of the shipwreck, the ship is still carried in Tao Luo Port.

On January 9, a bulk carrier "Glory" suffered a technical failure when passing the Suez Canal south, and was stranded at 38 kilometers in the canal, which briefly interrupted the traffic navigation of the important channel.

According to the Canal Service Company Leth Agency, the ship was on the way from Ukraine to China at that time. After the incident, after three hours of hard work, the bulk carrier successfully resurrected, and the canal traffic was not disturbed.

The relevant person in charge of the Suez Canal Administration said that the 26 ships traveled to Beihang at that time were not disturbed, and 21 ships sailing to the south immediately resumed their sailing after the bulk carrier was out of trouble, and it was expected that there was only a slight delay.

It is reported that on December 24, the ship departed from Chornomorsk, Ukraine to China, and loaded 65,970 tons of corn. Data from Shipwell Network shows that the ship is in a state of navigation and has returned to normal navigation.

Previous：The US imports continue to plummet, and the decline will continue in this spring
Next：A fire broke out in a port warehouse in Spain, and about 80 ships were burned!