News
NEWS
MSC one container is detained at sea; another container ship 10 containers fall into the sea


It is reported that the MSC container ship was threatened by a bomb when he was about to arrive at the port of Antwerp on December 22. At present, the ship is detained at sea, and the Belgian authorities are investigating the matter. The authorities said that as preventive measures, they have decided to let the ship return to the anchoring until the investigation is over.

Belgian media confirmed that the ship was a "MSC Lorena" wheel, a 59,587 -load -toned container ship, built in 2006 with a capacity of 4870TEU. In Belgium TV reports, you can see the container ship mooring off the sea.

AIS data shows that after the ship stops at the port of Africa, it goes to Antwerp Port. The ports include: Dorge's Lommei Port, Nigeria's Ragos Port, and Abie in Corteda, and finally the port of Dakar, Senegal, set off from there on December 16.

The ship has completed most of the cargo transportation along the Semhaild River, and arrived near the west of Antwerp at about 2 am on the 22nd. Police then ordered the ship to turn on to the anchor.

According to local news reports, the Belgian federal police received a call saying that the container ship "MSC Lorena" would "explode" shortly after the port of Antwerp. Both the Maritime Police and the Antwerp Port Affairs received alarm. The police also asked Belgium to be responsible for investigating the threat of terrorist threats to participate.

Police are currently investigating the phone call to determine its source. They cannot provide any additional information about the nature of the goods in the phone or on board. It was decided to stop the ship at the offshore to prevent other ships from the port of Antwerp.

According to data from the navigation network ship positioning website, the ship is still anchoring. Police said they would release the ship after completing the investigation.

A container drops 10 containers in the South China Sea

According to foreign media reports, on December 17, a container named "Pacific Express" was on the way from Ho Chi Minh to the coastal defense and suffered a storm at the coast of the Guangnan Province in central Vietnam, and 10 containers dropped. Three of the containers have been discovered by the locals and were rushed to the beach and were damaged. 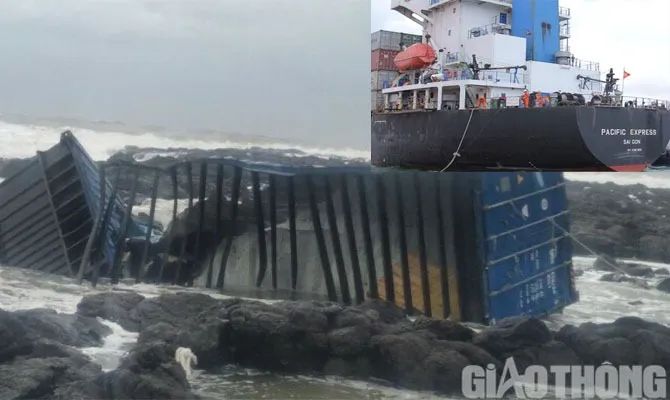 It is understood that the container ship "PACIFIC Express", IMO 9167851, has a capacity of 1118teu and a load of 11117. It was built in 1997 and hanged the Vietnamese flag, which was operated by the ship company Gemadept Shipping.

According to the data of the Souhang.com ship positioning website, the container ship is currently in the air. It will leave Ho Chi Minh Port in the early morning of December 23. It is expected that it will arrive at the Haifang Port on December 25.

Here we remind that if there is a main cargo company carrying these two ships, communicate with the shipping company in time to understand the latest status of the goods and delay in the subsequent shipping period.