News
NEWS
The 2M league is about to split? 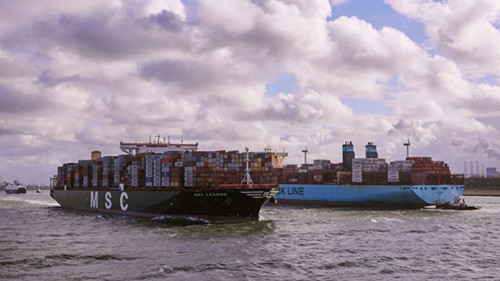 Multiple signs show that the split of the 2M alliance is coming.

Since August 2020, the Mediterranean Transport (MSC) has completed the acquisition of nearly 250 second -hand container ships, which has made transportation capacity more than Maski and become the world's largest container liner company. According to Alphaliner's latest data, MSC currently operates 709 ships with capacity of 4.6 million TEU, while Masky has 711 ships with capacity of 4.3 million TEUs.

At the same time, MSC also has a super order of 1.75 million Teu (this capacity is equivalent to the fifth -ranked Herbertot's fleet capacity of 1.77 million TEU), while Masky has only 374,000 TEU capacity orders. It is precisely due to the expansion of the former that it is likely that the 2M Alliance Agreement will no longer renew the contract after expire in 2024.

MSC said that its goal of continuously building new ships and acquiring second -hand ships is to reduce dependence on the rental market. After acquiring the ship, its own tonnage accounts for 45%of the ship's capacity. Special 62%is so high.

In addition, the scope of the ship purchased by the company is "cold and cold", from super large container ships to 2500TEU and below below naval boats. These acquisitions further support MSC to control more capable capabilities, rather than using cabin leasing to switch or use commercial branch line operators.

Many ships purchased by MSC have skyrocketed on daily rental fees, and shipowners tried to lock at the lease transaction at least two years at a high price. Therefore, the price of ships soared, although MSC obtained a second -hand tonnage at a low price at the beginning of the purchase frenzy, but at its peak market, they had to pay the highest price to ensure the smooth purchase.

From the actual data, in September 2021, MSC paid $ 68 million for the 5042teu CSL Santa Maria round built in 2005. According to the data from the authoritative ship data supplier VesselsValue, the authoritative ship data supplier, the ship is now valued at $ 30 million Essence In November of the same year, MSC acquired one of Sea Consortium's largest ships with a dazzling 105 million US dollars, namely the X-Press Jersey of 4896TEU built in 2014. Two years ago, the shipping company acquired the ship at a price of $ 27 million. According to the data of VesselsValue, it is currently worth $ 48 million. In other words, this branch boat company only rely on selling one container ship, which profit is nearly $ 78 million.

Although it caused losses for one -buying and selling rooms, because MSC has never disclosed key financial data and does not need to be responsible for public shareholders, MSC is unlikely to sell ships that have been acquired. At present, the biggest problem for them is that MSC has acquired a large number of ships during the peak market demand, and now the market demand is weak, and it is difficult for ship managers to re -deploy these capabilities.

Another team of another league told Loadstar that as the industry returned to the "new normal" driven by the unit cost before the epidemic, a "grabbing game" will appear between the routes.

In addition to the breadth of the capacity of capacity, the two ship companies in 2M have gradually embarked on two different development paths. MSC bought the boat crazy, continuously expanded the capacity of the shipping power to stabilize the throne at the sea. Power; Matsky turned his sight to the land, transforming the supply chain service provider from the collective giant to create a full -time logistics service. Different ways, the two ship companies may have more differences in subsequent alliance operations. Judging from the standpoint of MSC, the alliance not only needs to be reviewed by different regulatory agencies, but also requires the decision between the two parties in terms of capacity deployment. The decision -making will inevitably lag. This does not meet the current rapid expansion of MSC.

Previous：Europe is bursting!
Next：A ship in the East China Sea is fired! Seven crews were trapped!