News
NEWS
​75 sailings are cancelled in the next 5 weeks!

According to the latest report released by the authoritative consulting agency Drewry, among the 760 voyages on major routes such as trans-Pacific, trans-Atlantic and Asia to Northern Europe and the Mediterranean, during the 24th to 28th week (June 13-July 17) Japan), a total of 75 voyages were cancelled, with a cancellation rate of 10%.

Of these cancelled voyages, 75% were on eastbound transpacific routes, with the vast majority destined for the U.S. West Coast. 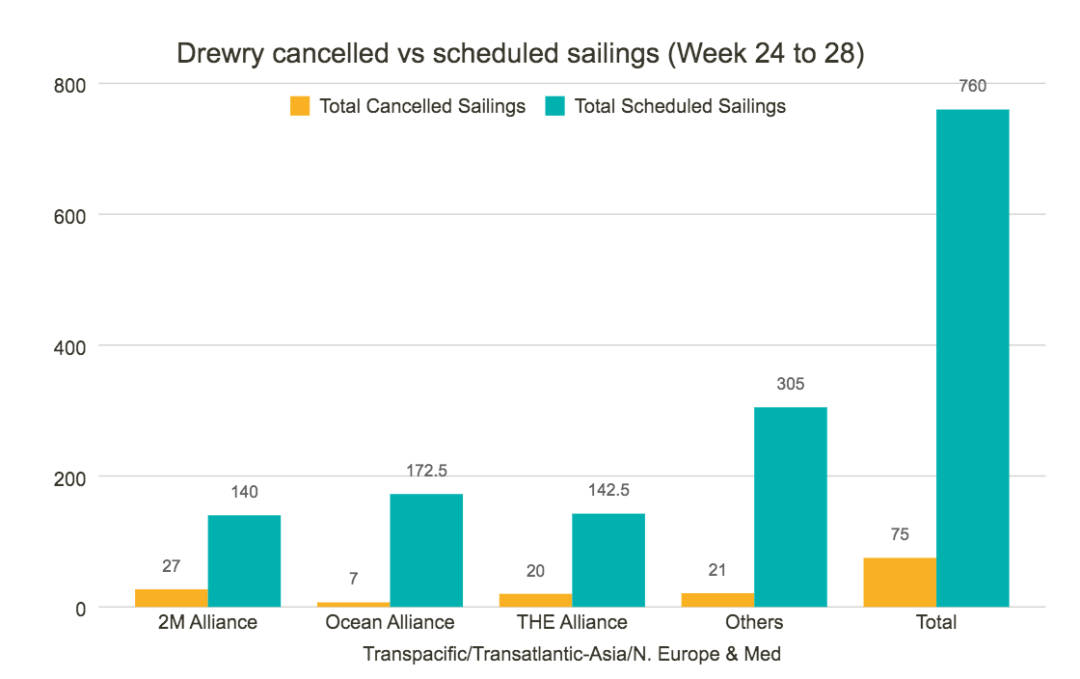 Voyage cancellations by alliances from week 24 to week 28

According to Drewry's analysis, after two months of strict control, the operation of Shanghai Port is recovering. However, the focus of the market has now shifted to concerns about the peak shipping season and the number of empty containers returning to Shanghai.

Drewry also reminded that the labor-management negotiations at the US-West Terminal are likely to be synchronized with the surge in Chinese exports. Under the superposition of various factors, cargo owners on the trans-Pacific route are preparing for a new round of supply chain risks.

Previously, the global maritime consulting firm Sea-Intelligence also stated in a report that the current container shipping market is in a state of high uncertainty.

On the one hand, due to the severe epidemic situation in China, the demand for production and transportation has declined, and liner companies have frequently suspended sailings.

On the other hand, in the past 12 months, new routes have been emerging in the market, and liner companies will deploy more capacity during the peak transportation season, which increases the uncertainty of the container shipping market.

In addition, global port congestion and ship delays, as well as the uncertainty of labor negotiations at the US West Wharf, will prompt importers to purchase goods in advance to avoid ship delays.

Previous：The era of big data analysis: how to use Google tools to find popular products?
Next：U.S. imports expected to be strong as peak season approaches