News
NEWS
Americans's hair is being controlled by the Chinese 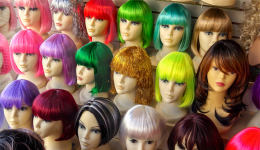 These wigs produced in Xuchang and other places in Henan, China, after hundreds of anchors with the condolences of the goods, have jumped into black fashion secrets. Their value and popularity increased sharply. The ground "reached the top" in the United States.

In order to grab the latest models, the youth of the black man began to become a frequent visitor to the live broadcast room: just like the lipstick of the Chinese girl grabbing Li Jiaqi live room.

CONTEE, a black girl living in Brooklyn, USA, stared at the phone intently -a Chinese fake seller in the Tiktok live room is fucking the dialect version of English and passionately demonstrating the wigs of wearing. Driven by the anchor, Contee was excited, and she had begun to imagine the charm magic that new hairstyles brought to herself. In the past year, "watching the live broadcast of China and buying a Chinese wig" is already the daily life of Contee.

"In the United States, on average, every five black people have a wig from Xuchang, Henan. The wigs are just black people." Tian Qing, a seller from the global wig Xu Chang, told Tiger Sniff. Because the black hair quality is mostly a hard curly hair, it is difficult to stay long and easy to fall off, which makes it difficult to take care of the hairstyle. In addition, under historical reasons, some white people think that the traditional black hairstyles are not decent, and they cannot enter formal social occasions. The wigs are into the wigs. Many blacks must be a must -have.

Tian Qing told Tiger Sniff that because of the expensive price, wigs are sometimes called "black gold". How many wigs of hair have even become a symbol of wealth status. Many American women like CONTEE spend about $ 20,000 a year on the wig. If the income is not high, it will be a heavy expenditure. In this case, the cost -effective Chinese wigs have gradually occupied the African -American market.

In fact, not only wigs, but also Chinese products are also occupying all corners of the American black market.

"Sports costumes, exaggerated jewelry, and video game accessories are all explosive products flowing into this market." Liu Sijun, chief operating officer of Dunhuang.com, told Tiger Sniff that as a TO B platform, the American black American who came to Myyshop purchased products came every year. There are more and more customers.

The African -American market seems to be an increasing place that cannot be ignored. According to data, as early as 2019, the consumption power of blacks in the United States has reached 1.4 trillion US dollars, which is higher than the Mexican GDP in the same period. Dollar. According to Nielsen data, nearly half (48%) of African -American families shop online in 2020, which is 11%higher than the average level of American families.

For Chinese people who go to the sea, the ability to discover the opportunities of market segments is becoming more and more important.

The need to be ignored and discriminated against

Although the blacks need to exist for the haircut category for a long time, Charlie said that before the Tymo's straight -hair comb product line entered the US market, large American brands rarely made customized products for black groups.

"The large Western brands have only begun to pay attention to the demand for a vertical market in the past year or two. Previously, the black group was not their main customers." Wu Chari said.

The reason for this phenomenon is related to some inherent impression. Among the cognition of many brands, the black group cannot bear a relatively high customer unit price, so it is treated with this market. But Charlie told Tiger Sniff that after its brand's practice in recent years, it reflects that the facts are not the case.

According to Charlie, in order to better fit the habitual habit of the black group, they not only find the most suitable temperature gear in the product (the fine soft hair of white people can generally meet the demand by about 160 degrees at low temperature; Generally, 180 degrees to 200 degrees; because the black group is mostly curly hair, you need to set higher temperatures), but also add rapid heating function to product functions to improve the efficiency of hairstyle. The amount of hair also needs to be adjusted according to the ergonomic product modeling.

From this point of view, if you want to get a higher customer unit price, it is essential to have enough work in detail.

Of course, in addition to products such as Tymo, many Chinese products have entered the American black market and rely on low -cost advantages.

The mixed wigs issued because the price of such wigs is not even half of the real price (Tian Qing's real hair products sell for about $ 100). After returning to China, Tian Qing increased the investment in chemical fiber wigs and ate a part of the sinking market.

In fact, in the United States, many products of African -American and American groups are ignored by local brands, and they will be treated unfairly when shopping.

According to a survey by Gallup in the United States in 2018, 59%of the U.S. blacks said that the treatment enjoyed in urban stores and large shopping malls is not as good as white consumers. Sales staff of physical stores, or shopping mall security, often think that blacks are more likely to steal goods, or have low economic levels, and cannot afford high -end goods. Some beauty hair brand physical stores, even lock the black women's product display cabinet, sometimes reject black consumers to buy.

However, when Tiger Sniff communicated with many people familiar with the market, it was found that there were still many "shopping discrimination".

Liu Sijun told Tiger Sniff that many American B -end customers who came to myyshop purchased were black people. They often increased their procurement products and sold them to their own communities. Because the local wholesale market is sometimes discriminated against, many black merchants have limited channels for goods. Previously, this predicament did not have a good solution, but as young people's use of the Internet became more common, many people began to discover the opportunity of Chinese cross -border e -commerce.

"We found that black customers who came to buy are getting younger and younger. They are generally 90s. Many of them only consumed themselves at first. Later, they slowly discovered that this business opportunity even became KOC in the local community. "Liu Sijun said.

The performance of Chinese products in the African -American market reflects their survival situation.

The American Black talk show actor once ridiculed in a performance: "I love the Chinese, I dare to say that in a black community, there are no less than 37 Chinese shops that have been done. All we like, chicken wings, headscarves, ponytail wigs, DVDs, and can even buy only one smoke at a time. But white people who have been staying with us do not know, and later people even know us more. We feel unpopular in this country. "

Although the situation of African Americans is left to some market space for Chinese people to go to the sea, Chinese products want to get rid of the identity of low gross profit and take the brand -oriented route, and they still have to face many challenges.

For example, for the wig products, although Xuchang in Henan provides most of the black market wigs, the offline terminal channels are mostly controlled by Korean bosses.

"In the United States, there are two types of wigs, one is a salon, which specializes in hairstyles and provides wig services; one is called SUPPLY, selling wigs and other hairdressing products. It was run by Korean. "Tian Qing told Tiger Sniff.

According to its description, before, his factory was mostly founded by these Korean bosses. They posted their own brands. A high -end wig, like China, could even be sold to thousands of dollars. Seeing such a high profit space, Tian Qing was unwilling to only make a foundry and began to explore the brand -oriented road, but the difficulty of business increased geometry.

"When doing foundries, I only need to consider production, and funds can also be expected. However, after taking the brand -oriented road, not only should we open up new offline channels, but also pay more costs that cannot be effective. Psychological pressure is more compared with more psychological pressure. Big. "Tian Qing said.

Tian Qing first encountered the pioneering problem of offline channels. Wig products are different from many categories. Testing of offline shops is very important. However, most of these shops are controlled by Korean bosses, and he can only find black hair shops to seek cooperation.

"At that time, I was going to run a dozen black boss's hairdressing shops. I often carried dozens of wigs on my body, repeating the product introduction over and over again." Tian Qing recalled.

And these efforts have just brought some results. Due to the epidemic, the plan was put on hold for a long time, and Tian Qing had to start looking for a new path. With the support of some old customers, Tian Qing led its company to start Tiktok live broadcast, and also conducted cooperation with the black American KOL to drain to its brand independent station.

"True resources are getting scarce." Tian Qing said. According to its description, its true hair materials basically originate from domestic and India. Among them, the quality of the country is the best and the highest in price, but the supply has begun to decrease a few years ago. Now, even the exit hair can earn more than one billion in India in China every year, and the real hair materials also light up signal lights.

A large source of hair in India is a temple. Due to the many shaved believers, businessmen will regularly collect their hair. However, with the change of the lifestyle of India's young people, India's hair resources have also begun to decrease. India's poor areas, even "hair cutting killers", forced girls to cut their hair with force.

"Perhaps the real resources will become luxury in the future. If you do not have the pricing power, the profit space will inevitably become smaller and smaller." Tian Qing said.

It is not difficult to see from Tian Qing's experience that although Chinese goods have space entered the American black market, Chinese brands have encountered a lot of challenges. Tian Qing is not an isolated example. Although Wu Chali's Tymo brand has entered the large offline supermarket in the United States, when it describes this process to Tiger Sniff, it is said that every link is very difficult, and the strong bargain of offline channels Capacity and marketing subsidy requirements make this step ahead of profitability.

"However, once you enter the black American market, the loyalty is relatively high whether the B -side or the C -end." Liu Sijun said. From the perspective of B -end, many black merchants will cherish the channel opportunities of Chinese suppliers due to the limited channels of goods; and from the C end, if they can better meet their needs than local brands, the black groups can be better than local brands. Strong social stickiness and gathering degree often have better communication effects, and the repurchase rate has also greatly increased.

For example, Contee, who is watching the live broadcast, is a frequent visitor to this Chinese brand live room.

After grabbing her "necessities" at a very favorable price, she relieved to save a lot of living expenses. At that moment, she had begun the possibility of fantasy new wigs to bring to herself: a few inspiration ins, girlfriends envy, and the fiery eyes thrown by the black guys downstairs ...

Previous：Stocking warning! The seller's goods were not on the shelves for more than 30 days, and the seller s
Next：These 6 points will make your Amazon operating level quickly improve!