News
NEWS
There are three high-potential categories on Amazon Europe.


There are three high-potential categories on Amazon Europe. How to make them more fragrant in the peak season at the end of the year?
With the European autumn and winter promotion approaching, Amazon Germany, the second largest platform after Amazon America, announced that it will recruit more than 10,000 seasonal workers for its logistics, sorting, and distribution centers to cope with the sharp increase in parcel volume during peak seasons.The German e-commerce market, the fourth largest economy in the world, has been growing rapidly thanks to its high network coverage and smartphone penetration rate. Catalyzed by the epidemic in 2020, German e-commerce e-commerce sales increased by 14.6% year-on-year to 83.3 billion euros.According to trend calculations, it is estimated that by 2024, this value will reach 120 billion euros, or even higher 141 billion euros. The rapid development of the German e-commerce market has also spawned some top high-potential categories.shipping from china to fba

There are three high-potential categories on Amazon Europe.
01 Toys & mother and baby2020 is the most significant year for the German toy industry to grow in 10 years, with a total growth rate of 9% and sales of 3.7 billion euros.In terms of platform sales, in the category of toys & mothers and babies, Amazon Germany, which has a large group of sellers, ranks first with sales of 792 million US dollars. German local e-commerce toys and children's mother and baby products shopping website myToys It followed closely with 376 million U.S. dollars. 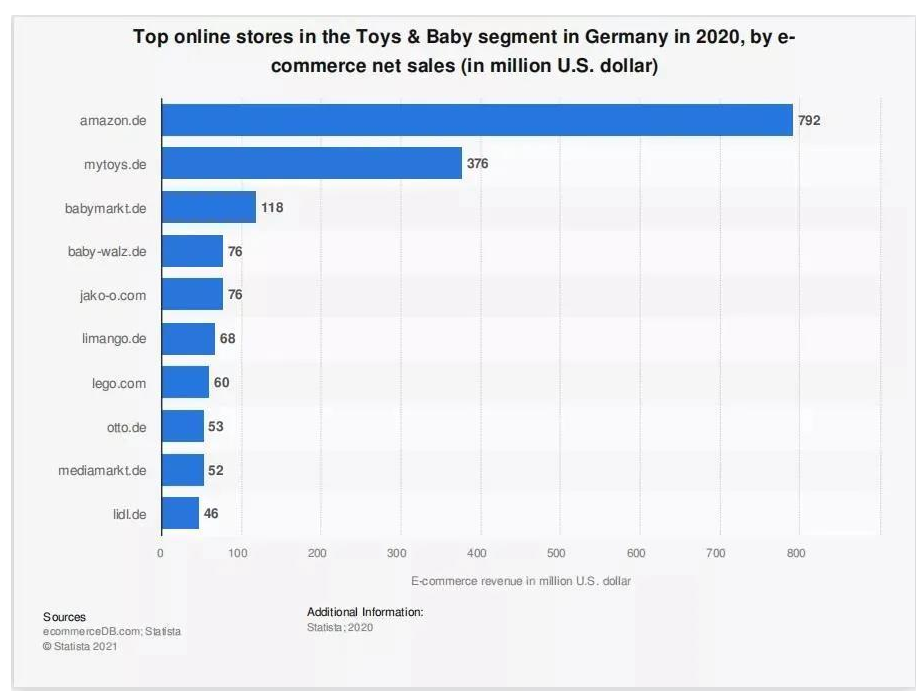 There are three high-potential categories on Amazon Europe.
shipping from china to fbaWith the advent of the holiday season at the end of the year, it can be expected that the toy track under the new consumption of mothers and children will usher in a new round of outbreaks. Online hot-selling products such as Lego blocks, educational toys, and blind boxes will become the "main force" in the toy category.In addition, baby clothing, safety seats and other maternal and child products have also become a gift-giving choice for many Germans. On the whole, "just-needed" maternal and child consumers are still optimistic about the future.02Fashion category: clothing & footwearThe fashion category, as a “top student” in cross-border selection of products, has been consistently ranked among the best-selling categories of major e-commerce platforms. According to a survey study by the trading portal MyDealz, the epidemic has stimulated the passion of German consumers for online shopping. This is particularly evident in the growth of fashion orders, which has increased by as much as 35%.The demand for women's clothing in Europe, led by Germany, is also rising.From the perspective of hot-selling products, comfort-oriented home clothing and footwear have become the favorites of many German consumers.At the same time, as a large number of clothing and footwear orders returned to China from Southeast Asian and South Asian countries, domestic factories have taken on most of the global fashion category. China's mature export and foreign trade clothing industry belt has given women's clothing to Germany a natural advantage.

The normalized home isolation has made German residents spend more on home furnishings. As one of the most advantageous categories in the cross-border market, home furnishings made in China have become necessities of family life in Germany and even Europe and the United States due to their practicality and high cost performance.For Chinese sellers with supply chain advantages, they have more market opportunities than overseas sellers in household sub-categories such as lamps, bedding, and decorative products.

In recent years, with the popularization of smart home life, overseas demand for small kitchen appliances and clean small appliances has continued to increase. According to incomplete statistics, about 19% of top sellers in Germany are mainly engaged in kitchen and household products.

shipping from china to fba

Previous：Notice! New rules for self-delivery returns at five European sites will be implemented on October 5
Next：Black Friday and Net One report window will be closed soon! Find out the rules,