Continue to rise! Between the shore and offshore RMB, the two rose to 7.10 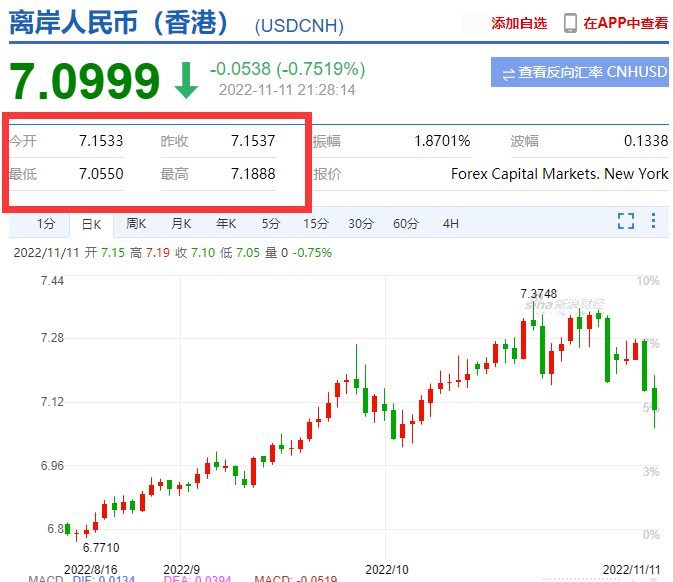 Affected by the US CPI data in October, the European and American stock markets rose sharply, the US dollar index fell, and the RMB rose straight.

November 10th. The U.S. Department of Labor announced on the 10th that the US consumer price index (CPI) increased by 0.4%month -on -year in October and 7.7%year -on -year.

The above -mentioned inflation data is lower than market expectations, indicating that the situation in the United States has improved slightly. The Wall Street Journal analyzed that the US CPI in October was the lowest level since January this year, but it is still at a historical high, which may promote the Federal Reserve to slow down the pace of interest rate hikes.

In October, the US CPI increased in September, a year -on -year increase of 0.5 percentage points from September. After eliminating the price of large fluctuations, the core CPI rose 0.3%month -on -month and 6.3%year -on -year.

The fourth consecutive month of second -hand car prices fell, and the decline in clothing prices and medical expenses helped alleviate the inflation level in the United States in October.

Data show that in October, food prices in the United States rose 0.4%month -on -month, which was the same as last month, but still increased by 10.9%year -on -year. Energy prices rebounded in October, rising 1.8%month -on -month, ending the momentum of decline for three consecutive months. The residence cost of about one -third of the proportion of CPI rose 0.8%month -on -month, an increase of 0.1 percentage points from September.

"In October, CPI data increased the possibility of the Fed's slow interest rate hike rhythm." The Associated Press quoted economists, saying that even if inflation was initially eased, the Fed may continue to increase interest rates and cool down the economy.

After the latest CPI data is announced, even if the inflation rate slows down, it is still much higher than the Fed's 2%target, and the several areas reported that the cost of living is still high. The cost of about one -third of the CPI rose 0.8%in April, the largest monthly increase since 1990, a 6.9%increase from the same period last year, and the highest annual increase since 1982. In addition, the price of fuel oil soared 19.8%in the month, up 68.5%in 12 months.

After the announcement of CPI data, the futures market's betting on the Federal Reserve ’s interest rate hike next month has risen sharply. According to the "Fed Observation" tool of the Zhishang Institute, after 20 minutes of the data release, the trader believes that the possibility of the Fed's interest rate hikes in the middle of next month has risen to 80.6%. In contrast It has been reduced to less than 20%.

The "Fed's New Music Volume" Nick Timiraos posted that the inflation report in October may cause the Federal Reserve to raise interest rates 50 basis points next month. Officials have hinted that they are a little sensitive to recent inflation data and hope to slow down the pace of interest rate hikes.

Shortly before the release, the Fed Chairman of the Philadelphia Hak also said that the signing from 75 base points to 50 basis points is of great significance. As a 2023 ticket committee, he is also expected to suspend the austerity policy at some point next year.

According to data released by the German Federal Bureau of Statistics on the 11th, the inflation rate in Germany in October was 10.4%, a new high since the second consecutive month.

The Director of the German Federal Bureau of Statistics, Georg Til, said in a statement that rising energy prices is still the main reason for high inflation, but the rise in other commodities and service prices is becoming more and more obvious.

The preliminary statistics released by the EU Statistical Bureau showed that due to the situation of the situation in Ukraine, the energy and food prices of the euro zone continued to soar. In October, the inflation rate was 10.7%at an annual rate of 10.7%, a record high.

Previous：Starting today, the European port has begun to strike, and the sea, land and air are restricted!
Next：The freight price of the European line and South America has plummeted, and multiple routes have exp