Affected by weak global demand and sluggish economic outlook, the freight rates of major routes in the market have continued to decline, and may be in a downward channel for a long time.

On September 2, the SCFI released by the Shanghai Shipping Exchange was 2847.62 points, down 306.64 points or 9.7% from the previous issue. This is the second consecutive week of sharp declines in SCFI, with a drop of 8.0% last week.

It is particularly noteworthy that on September 2, the freight rate (sea shipping and shipping surcharges) for exports from Shanghai Port to the West American base port market fell to $3,959/FEU, a 23% drop from a week ago.

Analysts at the Shanghai Shipping Exchange believe that due to the persistently high inflation, the Fed is forced to continue to raise interest rates and shrink its balance sheet to curb inflation, and the U.S. economic situation will continue to deteriorate in the future. The lack of growth in transportation demand in the US market and the relatively weak fundamentals of supply and demand led to a sharp drop in freight rates on the US-Western route.

NCFI also specifically mentioned that the current China-Thailand-Vietnam route has a large gap in freight demand, the spot market booking price has dropped sharply, and even a small number of "zero freight" and "negative freight" have occurred. The freight index of this route fell by as much as 37.1% in one week.

In contrast, FBX, a joint release of the Baltic Shipping Exchange with Freightos, fell only slightly. On September 2, the index was at $5,426/FEU, down 4.8% from the previous week.

Compared with the beginning of 2022, these three freight rate indexes have all been "halved".

He further said that global supply chains are still under strain and there are still severe congestion in places like the US and Europe.

The trade volume for the rest of the year has not improved.

Earlier, the two major retail giants in the United States, Walmart and Target, announced that they were canceling a large number of orders. Due to changes in consumer behavior, high inflation pressures, and the overly aggressive restocking earlier this year, U.S. retailers are currently facing great challenges in their supply chains. 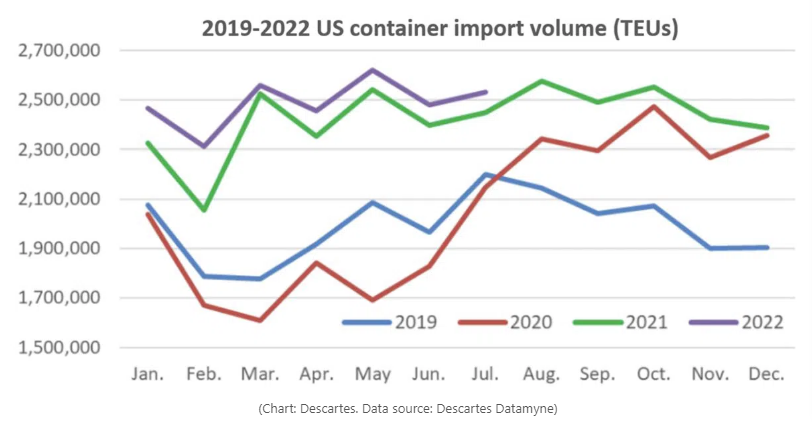 The National Retail Federation (NRF) lowered its forecast for U.S. demand. Total retail cargo arriving at major U.S. ports is expected to total about 12.8 million TEU from July to December this year, down 1.5% year-on-year.

In addition, the Global Trade in Goods Barometer released by the World Trade Organization (WTO) in August showed that although global trade in goods continued to grow in the second quarter of 2022, the growth rate was lower than that in the first quarter, and may continue to be weak in the second half of the year. Its latest forecast is that global trade in goods will grow by 3.0% in 2022.

Previous：ZIM, China-US route, a big contract of 1 billion US dollars!
Next：Another port announced a strike for up to 15 days!