The container charter market has passed its peak, with the Alphaliner charter index falling to 515 in May, down from an all-time high of 563 in March, Alphaliner data shows. 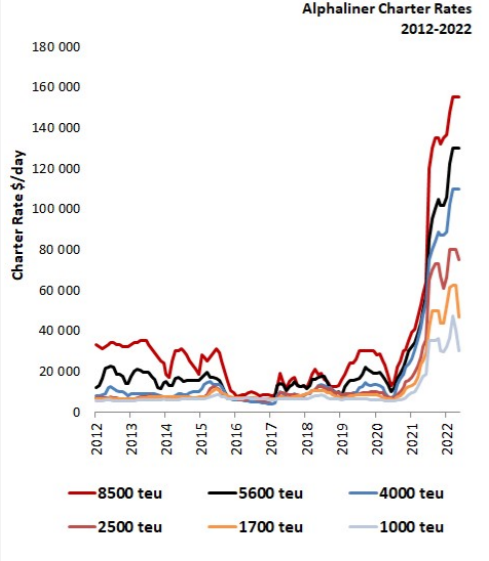 Although the charter index has declined, it is still a very high position

However, Xinde Maritime Network has recently learned that Euroseas, an independent shipowner company headquartered in Greece, has recently locked a long-term fat contract for the first two of its batch of feeder container ships built in South Korea in advance.

Specifically, the Nasdaq-listed shipowner company recently revealed that a (unnamed) container shipping company has leased two 2800TEUs of the company, which will be named Gregos and Terataki’s shipyards in South Korea. The built container ship is 36-40 months. Although this is a contract with a not short lease period, the rental level still reaches the sky-high price of 48,000 US dollars per day.

The two ships are currently under construction at Hyundai Okpo Shipyard in South Korea, and are scheduled to be delivered in March and June next year, respectively, meaning the charter will run until 2026.

CEO Aristides Pittas made no secret of his delight at the lease, stating, "This contract will generate EBITDA of over $85 million for the company.

He added more bluntly that this means we will fully recoup the cost of building them in "about 3 years".

In addition, with the signing of this contract, the company's fleet contract coverage ratios in 2023 and 2024 have also reached 76% and 55%.

Euroseas exercised options for alternative orders for two vessels a few days ago on its order at the Korean shipyard, and there are currently seven newbuilds awaiting further signings. The delivery date for these ships is also between 2023-2024.

It is worth mentioning that the final cost of the above two alternative orders reached 43 million US dollars, which is still slightly higher than the price of the company's initial order four months ago. In addition to this, the shipowner revealed that it will invest an additional US$11 million to improve the emissions friendliness of these ships.

And from the previous meeting of IMO NOX Tier II to Tier III standards and to achieve LNG Ready. The company has 18 container ships in operation.

Another independent shipowner from Germany, MPC Container Ships (MPCC), said that the current charter market is still very attractive, which makes the company reluctant to sell its ships at sky-high prices.

"The charter market has been very strong, especially in the first quarter," Chief Executive Constantin Back told analysts on the company's conference call last week.

“This creates significant added value for our fleet.” “We need to determine whether to lease or sell the vessel depending on the specific market environment.”

“I think what happened in the first quarter shows, at least in our opinion, that we made the right decision, which is to charter a lot of ships to good partners.”

It went on to say that we are constantly evaluating our strategy, but for now we are doing the right thing as MPCC can continue to pay a substantial dividend without having to sell ships and retain a sizeable fleet that will remain in the future. There will be more upside.

Constantin back also said that with the coming into effect of the new environmental emission regulations, it is expected that more small container ships will choose to sail at a slow speed, which will further change the trade pattern of the container shipping market, which will have a positive effect on the market.

"So I wouldn't say we need to sell ships now, quite the opposite. I think it's a very attractive charter market at the moment," he said.

Freight and charter rates for container ships are still near record highs, according to Clarksons Platou Securities.

Clarksons analysts Frode Morkedal and Even Kolsgaard said, "Despite mounting macroeconomic headwinds, the outlook for the container shipping market remains positive for now due to continued demand and severe logistical disruptions."

But they added: "Container shipping market conditions are likely to ease as inefficiencies (logistics chain bottlenecks) disappear and fleet capacity increases (over 8% in 2023).

However, driving slowly to meet emissions targets will be a positive for the market. Currently, tonnage suppliers such as MPCC can enjoy a large number of charter orders, which in our view provides significant upside potential for the share price. "

Previous：The ports on the Asia-Europe route are seriously congested, and the shipping schedule is delayed for
Next：COSCO SHIPPING Ports acquired a 5% stake in Zeebrugge Terminal, and its shareholding ratio rose to 9