News
NEWS
The price of air freight hit a record high, and the reason for the soaring price has doubled!


According to the British "Financial Times" (FT) report, last week, the price of the route from Shanghai to North America reached US$14 (approximately RMB 89) per kilogram.

At the same time, air freight prices from Hong Kong, China to Europe and the United States and Frankfurt, Germany to North America have also increased simultaneously. 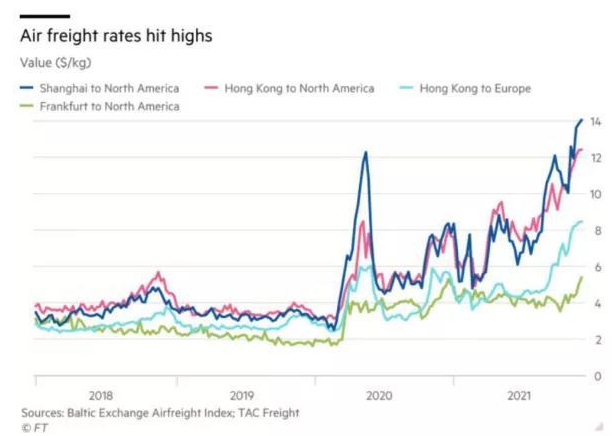 The Financial Times analyzed that there are many reasons for the soaring air freight prices:

First, the global shipping congestion has caused a large number of companies to switch to air routes to transport products such as fashion goods, consumer electronics and parts;

Secondly, the widespread spread of the new crown "Omi Keron" strain has caused a large number of new crown testing reagents and personal protective equipment needs across the world;

Finally, due to holidays such as "Black Friday" and Western Christmas, the global supply chain will be very busy at this time.

In the past, half of air cargo was often carried by passenger planes, but now many passenger planes are grounded during the epidemic. When airlines reopen their routes, they often choose sightseeing routes instead of trade routes. At present, some airlines have turned to undertake air freight services, and logistics companies such as FedEx and DHL are also filling in some of the gaps.

It is reported that the U.S. government's efforts to reduce port stay time did not seem to have worked, although a new directive was announced in mid-October, requiring the two major U.S. ports to operate around the clock. However, this cannot save the shortage of Christmas goods. Now it takes 21 days, or 3 weeks, for a cargo ship to enter these two ports, and it only takes about 7 days in August. Not only has the efficiency not improved, but it is getting lower and lower.

It is understood that some airlines have begun to convert their aircraft into air transport planes to fully respond to the increasing demand for such convenient, fast but expensive services and achieve revenue growth when the travel business is blocked.

Previous：DDP or LDP? Many people can’t tell me apart, I’ll explain it to you!
Next：44 voyages will be cancelled on the main global routes, with 75% of the US West routes