News
NEWS
The new ship just extinguished the fire, and turned around it was a shocking explosion!


The new ship just extinguished the fire, and turned around it was a shocking explosion! The cargo was completely destroyed, the ship was about to sink, and the crew was still diagnosed!
Recently, the industry was screened by a container ship explosion and fire in the waters of Colombo. This Singaporean shipX-PRESS PEARL has been on fire from May 20 to the present, and it has been creating oolong incidents with "one twists and turns".Continue to bring "surprise" to the industry. 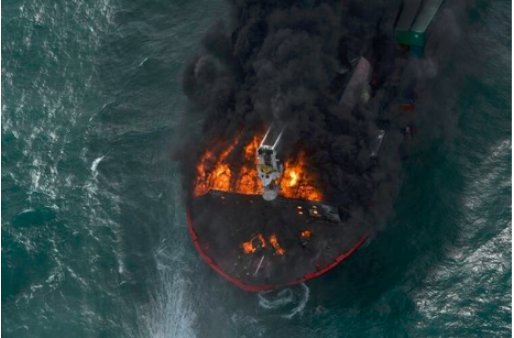 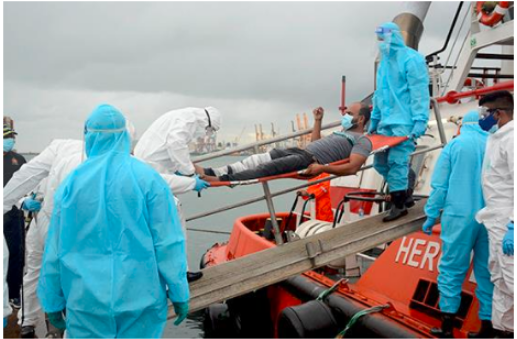 The third "surprise"——The out-of-control fire was caused by improper packaging of nitric acid, and the ship was refused refuge in two ports.Tim Hartnoll, the executive chairman of Singapore’s X-Press Feeders, the owner of the ship, said that the improper packaging of the nitric acid cargo on the ship caused acid leakage and was the cause of the fire and explosion. The nitric acid had a chemical reaction with other cargo.And Tim Hartnoll said that this huge disaster loss could have been avoided because the crew detected a leak of nitric acid packaging in one of the containers on the ship shortly after leaving the Indian port of Hazira, while in the Arabian Sea thousands of kilometers away from Sri Lanka. The captain contacted two ports, Hazira on the west coast of India and Hamad in Qatar, and requested to berth and unload the container in question, but both were refused.Another person from the company commented: “If these ports perform their duties and receive cargo, instead of allowing dangerous cargo to remain on board and endanger the safety of crews and ships, this disaster can be completely avoided.”But in the end, the fire caught fire from a container loaded with nitric acid and spread rapidly until it caused a completely irreparable loss. 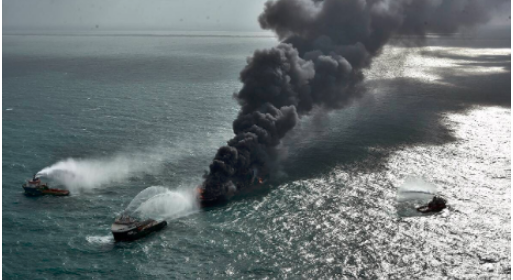 The fourth surprise-The whole ship has been almost burnt down, and has rolled over, and may sink and leak oil at any time.As the attempt to extinguish the fire ended in failure, Sri Lankan navy officials said that due to turbulent waves and bad weather, the cargo ship was now tilting to the right in the violent burning, and more and more containers on the ship began to fall into the sea, some of which sank.The Colombo Bulletin reported that X-PRESS PEARL is currently very unstable and is expected to sink. The Sri Lankan authorities have also classified the incident as a level 2 oil spill and have begun to prepare for a major oil spill, which has also aroused the island country’s high environmental concerns.In addition to the 325 metric tons of fuel oil in the X-PRESS PEARL tank, there are 1,486 containers on board, which contain about 25 tons of harmful nitric acid.The Marine Environmental Protection Agency warned that any oil spills will flow to the sensitive Negombo Lagoon, which is a major tourist attraction.cargo from chinaThe cargo ship was burned out, and the shipowner will announce all lossesAt present, the deck and containers have been completely engulfed by the fire. The owner has no hope for the new ship delivered in February this year. It is expected that the London P&I Club will announce all losses soon.

According to a report issued by the marine insurance company Gard, the current fires involving container ships occur on average once every two weeks and remind ships to be vigilant.Gard's report also analyzed three main reasons for container ship fires in history:✦The first place is self-heating charcoal;✦The second place is incorrect packaging of chemical substances;✦The third place is batteries that use chemical substances.cargo from chinaIn the above-mentioned case, this major loss accident can basically be preliminarily determined to be caused by the second leading cause, that is, the improper packaging of nitric acid cargo and the chemical reaction after the leakage caused a fire.Leading freight and transportation insurance company TT Club pointed out in a report that poor packaging of container cargo and shippers’ misunderstanding of the dangers of certain cargoes result in more than 6 billion U.S. dollars in losses each year, a third of which is related to cargo damage. The two incidents were all caused or exacerbated by improper loading of goods into containers, including the disastrous container ship fire.cargo from china

Michael Yarwood, MD of TT Club Loss Prevention, added: “The dangers are not limited to chemical goods, such as those used in paints, cosmetics, cleaning products, fertilizers, herbicides, and aerosols. The list is long and often surprising, such as Barbecue charcoal, battery-powered electronic equipment, fireworks, hand sanitizer, wool, cotton, plant fibers, marble, granite and other building materials, etc., can all cause fires."Michael Yarwood urges shippers to refer to the contents of relevant container packaging regulations in the industry: the International Maritime Organization, the International Labor Organization and the United Nations Economic Commission jointly issued the "Cargo Transport Unit Packaging Operation Regulations" (CTU regulations).Michael Yarwood said: “CTU regulations provide comprehensive information on all aspects of packaging and securing goods in container freight and other transport units in all shipping and land transportation methods. It can not only guide the personnel responsible for packaging and securing the goods, but also guide the collection The people who deliver goods and unpack the boxes."cargo from china

Previous：The rise of British social e-commerce, the number of people shopping through TikTok surges by 553%
Next：China has become Britain’s largest source of imports, accounting for 16.1% of Britain’s total import