News
NEWS
China's shipments have fallen, and the imports in the United States has fallen sharply in September


According to data analysis company DESCARTES DataMyne data, the US container imports in the United States in September were 2.2157 million TEUs, a year -on -year decrease of 11%compared with the same month in 2021, and a decline of 12.4%from August this year. This is the first significant in the past two years. Flow. The decline in imports originated from the slowdown of the economy, retailers reduced imports, and high inflation caused by high energy costs.

Although the import volume of the United States seems to have begun to be corrected (returning to normal), Descartes believes that it is too early to say that the global shipping crisis is beginning to end, because other logistics indicators still indicate that the supply chain blockage may continue until the end of the year. First of all, the main ports of the United States are still congested, and the ports of the east coast and the Gulf areas are especially true. There are still delays of about 10 to 14 days. 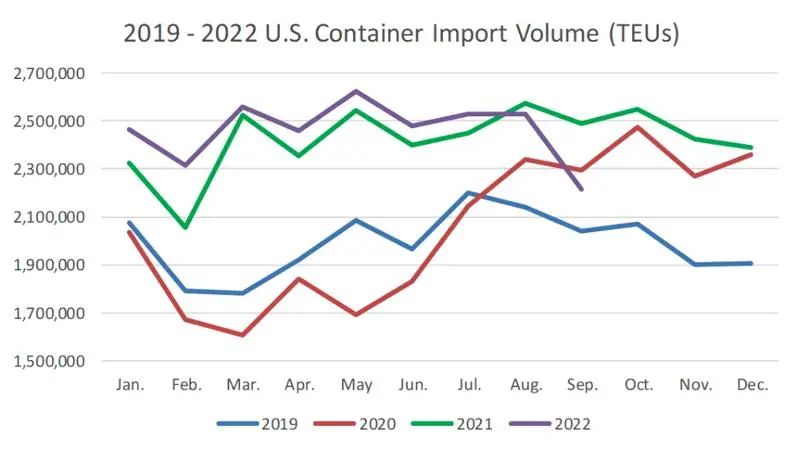 Secondly, as shown in the figure above, although the amount of imported containers in the United States has declined significantly year -on -year in September, it is still higher than the normal level before the epidemic, an increase of about 9%compared with September 2019. DESCARTES's latest shipping data shows that the amount of monthly imported containers in the United States still hovered around 2.4 million TEUs. As long as this number exceeds this number, the processing capacity of the US port will be seriously nervous.

DESCARTES's global trade and shipping data shows that the decline in imports from China has led to the overall decline in imports in the United States. In September, the total container imported from China from China was 820,329teu, a year -on -year decrease of 22.7%, and a decrease of 18.3%compared with August. The good news is that it eases the congestion and delays of the West Coast port, especially the Los Angeles and Long Beach Port. However, the number of delays in the East Coast and Gulf areas is still double -digit.

DESCARTES data shows that the risks of workers on West Coast Wharf continued to push the container to the east coast and the Gulf port. The problem includes the renewal negotiations of the International Wharf and Warehouse Alliance (ILWU) contract, as well as the restrictions on the individual account of the California AB5 Act.

At the same time, despite the shrinking of the US GDP for the second quarter in a row, the US economy is still relatively strong. The October employment report showed that US employment positions increased by 263,000, a historical low of the unemployment rate to 3.5%.

Previous：Come ~ Learn about the horror record set in MSC in the past two years
Next：Multi -purpose/major shipping market has fallen rapidly, but shipping companies are still optimistic