The Mediterranean Transport Corporation (MSC) has recently ordered more than a dozen 16000teu LNG dual fuel ships. At this point, the order of this world's largest shipping company is now close to 2 million Teu. This number is so large.

How big is the amount of orders for MSC?

According to Linerlytica's data, MSC's order volume has reached a record of 1.96 million TEU, which is equivalent to 43%of its current fleet capacity.

From another perspective, MSC's order volume is larger than the total number of orders for Matsques, Dafei Sea, and COSCO, and the latter is the second, third and fourth largest shipping companies in the world.

According to SPLASH estimates, MSC's order volume currently accounts for more than 25%of the order volume of all container ships (in the TEU as a unit).

The amount of orders for MSC is so large that it will be exceeded the screen on the AlphaLiner website to complete the proportion of its order part.

MSC surpassed Maski in the capacity ranking at the beginning of the year at the beginning of the year, ranking top of the list. Although Matsky has always stated that he does not intend to make his fleet more capable of more than 4.3 million TEUs, MSC still moves quickly, and soon expands his leading advantage towards Masisky Essence It can now be seen on the Alphaliner rankings that the gap between gold and silver medals is about 225,000teu.

The current global order volume is about 7.2 million Teu (MSC accounts for 27%), which is much higher than the 6.6 million TEU recorded in 2008. As the MSC and the global liner industry have reached a new high in 2023 and 2024, people have more and more speculation on orders for orders.

I bought 250 ships in more than two years

Since August 2020, MSC has begun unprecedented ship purchase boom. In these 26 months, the number of second -box ships purchased by MSC has also become headline news.

According to Alphaliner's data, in just over two years, the company has purchased about 250 second -hand ships, and the nearest one was the "Northern Jasper" of 8814teu acquired last week.

The brokerage company Braemar expressed his view on the latest second -hand ship purchase boom of MSC, saying: "Seeing the active transactions of a large traversal company really help strengthen market confidence, but if the rental market cannot be stabilized quickly, the price will still be large. fluctuation."

Although from a historical point of view, MSC, which originated in 1970, has always paid much attention to ship rental, but in the past few years, the liner company has a record -made benefits, and this situation has changed. According to Linerlytica, since 2020, MSC's ownership of its own ships has increased from 51%to 69%.

With the turning of the market, MSC's every move will affect market changes. Other carrier not only hopes that MSC can postpone the delivery of some new shipbuilding in the next few years, but also hopes that in 2023 and 2024 Many analysts expect the scrap volume of container ships to reach the highest level in history. 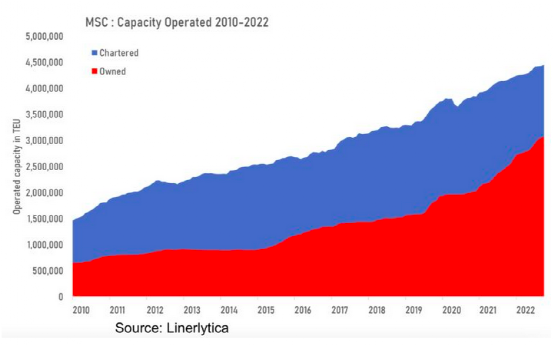 Previous：The shipping giant Masisy has experienced the mountains and valleys at the same time
Next：China's shipments have fallen, and the imports in the United States has fallen sharply in September