In the past two years, ocean freight rates have risen, and it has been difficult to find a cabin, which has brought a lot of pressure to foreign trade companies. At present, the pressure on shipping prices has eased considerably.

It is now the peak export season, and many industry insiders said that the freight rates of most popular routes have dropped to varying degrees compared with the same period last year.

A buyer in Yiwu, Zhejiang said that before the freight rate was high and the shipping space was very tight, his customers were less willing to place orders, and even temporarily suspended shipments. Now the situation has improved. Goods go out fast, customers sell fast, and we return orders fast.

The latest Shanghai Container Freight Index (SCFI) was 3,887.85 points, down 108.92 points or 2.7% from last week, marking the seventh consecutive week of decline.

In the latest issue, the freight rates of major routes all fell:

For the Persian Gulf route, the freight rate was US$2,789/TEU, down 6.1% from the previous issue.

The Australia-New Zealand route continued to fall, with a price of US$2,997/TEU, down 4.6% from the previous issue.

South American routes, after rising for several consecutive weeks, fell back, and the freight rate was US$9,439/TEU, down 0.5% from the previous issue.

Among them, the Southeast Asia-Singapore route of the near-ocean route has the deepest decline in a row. Following the 3.6% decline last week, the latest week fell by 4%, falling below 1,000 points.

The latest data released by other major freight indices show that freight rates in the spot market continue to decline.

Drewry's World Containerized Index (WCI) has fallen for 22 consecutive weeks, with the latest WCI composite down 0.9% for the week to $6,761.63/FEU, down 28% from a year earlier.

Drewry expects rates to continue falling in the coming weeks. 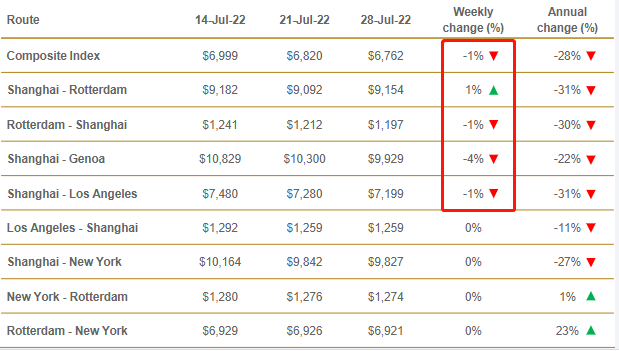 At the same time, in order to curb the decline in freight rates, the number of liner companies suspended sailings increased significantly compared with the same period last year.

Ningbo Shipping Exchange analyzed that in order to curb the rate of decline in freight rates and ensure revenue, liner companies have taken and may use long-term measures to adjust their shipping capacity.

According to the data of Easy Shipping, from June to July this year, liner companies suspended 114 voyages, 36 voyages, 24 voyages, and 22 voyages in Asia-Western America, Asia-East America, Asia-Northern Europe, and Asia-Mediterranean respectively. The total number of suspensions was about 2.8 times that of the same period last year.

According to the latest data released by Drewry in this issue, in the next five weeks (weeks 31-35), the world's three major shipping alliances have successively cancelled a total of 76 voyages. 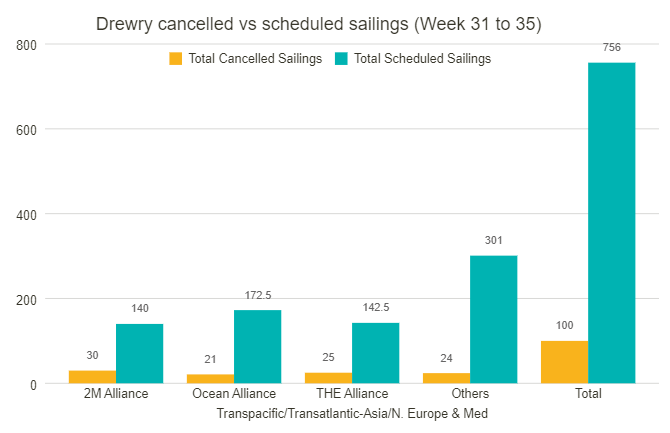 Out of a total of 756 scheduled sailings on major routes such as the transpacific, transatlantic, Asia-Nordic and Asia-Mediterranean, 100 sailings were cancelled between weeks 31 and 35, a cancellation rate of 13%.

According to Drewry's current data, 68% of air travel during this period will occur on the trans-Pacific eastbound trade route.

Flexport also pointed out that air travel has become common in the market and has become a means for carriers to cope with low spot freight rates and low demand. 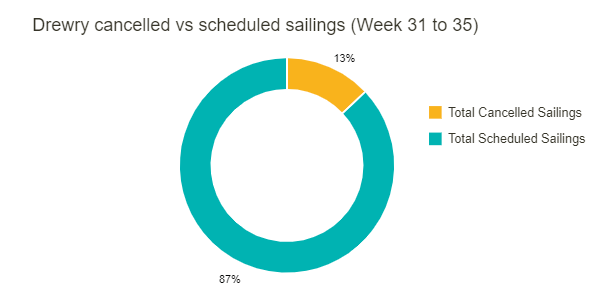 Drewry said high inventory levels in Western countries, especially in North America, combined with inflation and the impact of the epidemic have dampened demand for Chinese goods. Shippers and BCOs appear to be waiting for developments in the coming weeks before placing new orders.

A few days ago, the shipping company HMM issued a notice saying that due to the increasing congestion of European terminals and the increase in the detention time of imported containers, the utilization rate of the yard continued to rise and high-load work, which adversely affected the operation, throughput and resources of the terminal.

HMM said that while concerns and rejections of these surcharges have been raised with the terminal, the company reminds customers to pick up import containers as soon as possible within the free period to avoid this surcharge, otherwise, the additional surcharge imposed by the terminal will be transferred to customers.

Previously, a platform issued a report saying that shipping companies are adopting more aggressive aviation strategies to deal with the decline in demand.

Shipping lines will also employ "other strategies", including slower sailings, to shore up freight rates and mitigate the impact of soaring fuel costs, it said.