The management of the Oakland International Container Terminal (OICT) suspended operations at the Port of Oakland on Wednesday as protesters against California's AB5 law blocked the gates of all its terminals. The strikes and protests have been going on for three days and are likely to continue until Friday. (Review of the previous situation: truck drivers strike to block the entrance to the terminal, 40,000 railway workers plan to strike three times, and the shipping company issues an early warning)

The TraPac terminal sent a message to cargo truck drivers that the first shift at the terminal was unavailable on Wednesday due to "ongoing protests disrupting the entrance."

It was the largest truck driver protest against the law to date. The message from protesters to California Gov. Gavin Newsom on Wednesday was: "There will be no movement of goods until AB5 is repealed."

AB5 requires companies that hire independent contractors to reclassify them as employees. An estimated 70,000 truck drivers who own and drive their own trucks will be subject to the law and do not want to be employees or union members to work.

One of the protesters was AB Trucking owner Bill Aboudi. "So far, there has been no contact with the governor's office," he said. "It doesn't appear that the governor is concerned about disenfranchising American workers. These are independent small businesses that chose to operate their own trucks, and that right is now being taken away. They do pay taxes and they have insurance, that's their choice."

As the eighth largest port in the United States, the Port of Oakland has more than 2,100 trucks passing through the terminal every day. The port imports a wide range of goods, from Australian wine and meat to South Korean aluminum, and Chinese furniture, clothing and electronics.

Nearly 100 dockworkers from the International Docks and Warehouse Union (ILWU) refused to cross the protest crowd due to safety concerns after truck drivers at the Port of Oakland showed up early and blocked the gates. Dockworkers can refuse access to marine terminals if they feel "unsafe" or threatened in any way. "Our labor contracts allow workers to stand by for health and safety when conditions at the terminal are at risk," said Farless Dailey III, president of ILWU Local 10.

SSA Terminals decided to suspend its operations due to insufficient workforce. There are three other marine terminals in the Port of Oakland, where shore operations are ongoing. But truck gate activity is either minimal or closed.

Multiple sources said protests at the Port of Oakland would continue through Friday. In addition, the protests have resulted in a drop in productivity and increased container waiting time at the terminal. 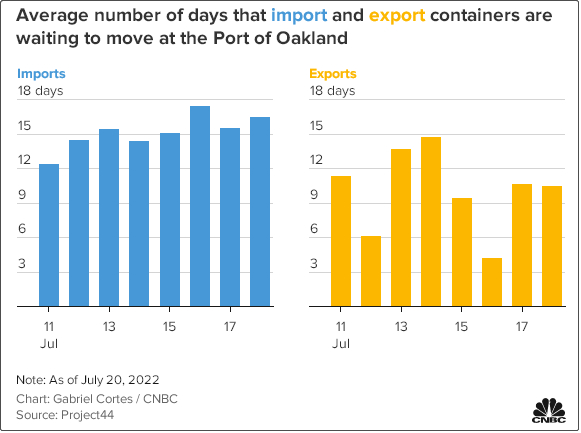 About 100 truckers protested at the ports of Los Angeles and Long Beach last week, but the impact was not as severe as Oakland due to the size of the ports. The Port of Long Beach, Los Angeles, has an estimated 15,000 trucks passing through the port every day, more than seven times the trucking capacity of the Port of Oakland. But even on a massive scale, the ports of Los Angeles and Long Beach are already heavily congested, and any disruption to truckers will only exacerbate the massive container congestion.

The problem with these West Coast ports is that the waiting time for containers shipped by rail is about 11 days. Containers transported by truck account for less than 40% of all long-delayed containers at the port. With rail containers piling up, the Port of Los Angeles is currently 90 percent occupied by land capacity, and any delays in truck pickups will only exacerbate congestion.