News
NEWS
Container freight has fallen sharply. How much has it fallen?

It is reported that the high-priced freight contracts that shippers signed when shipping capacity was tight and eager to restock their inventory are now reduced to "a piece of waste paper" as freight rates slump due to slowing demand and a wobbly U.S. economy.

This is because the current shipping market has seen the rare phenomenon that the spot freight rate falls below the long-term agreement price. Some traders are renegotiating forwarders to revise long-term shipping agreements they entered into at the height of the pandemic-induced surge in freight demand, or simply switch to spot market rates for shipping.

The drop in container shipping rates is undoubtedly good news for manufacturers and retailers, who have been grumbling over the sharp rise in shipping costs over the past two years. This phenomenon also shows that the "outstanding" contribution of the freight industry to high global inflation has finally subsided. These are undoubtedly a huge shift - the world has previously faced severe delays and shortages in container shipping for most of 2021.

How much has container freight dropped?

According to the FBX index released by the Baltic Shipping Exchange, as of last Friday, the FBX container shipping price averaged $6,495, down more than 41% from its record high in September last year. 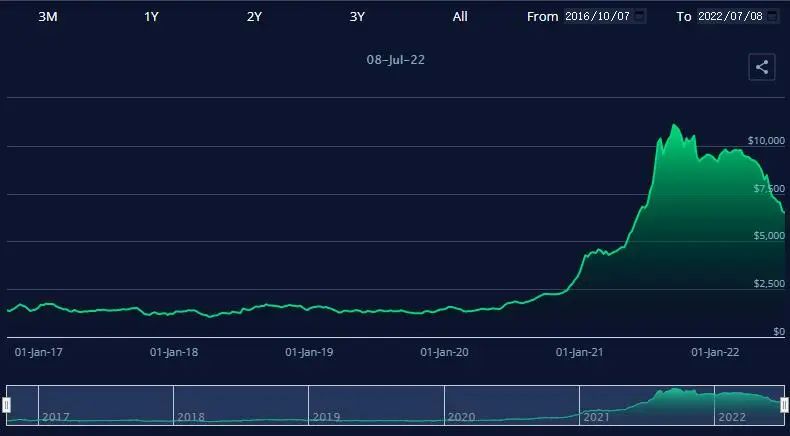 In addition to the FBX index, the Drewry World Containerized Index (WCI), which is based on the eight major routes of Asia-America, Asia-Europe and Europe and the United States, is also falling across the board. The WCI index fell further to $7,050.94 last week, marking its 19th straight weekly decline. 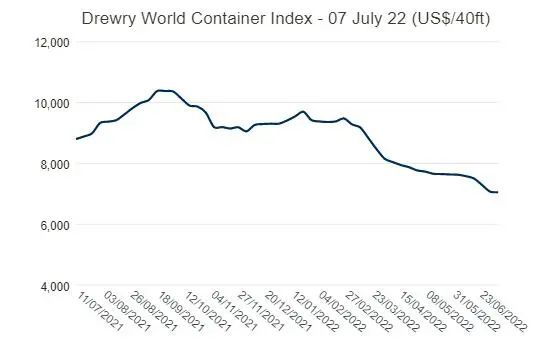 The head of a large U.S. importer said he had recently cut rates for ocean shipping contracts signed a few months ago by 15%-20%. The executive expects freight rates to drop further later this year. "The situation is moving in favor of importers," he said.

The long-term deal for cargo from China to the U.S. West Coast nearly tripled to $7,981 per standard unit (FEU) between June 2021 and June 2022, according to Norwegian shipping data and sourcing firm Xeneta. However, the spot freight rate began to fall back in March this year, and fell below the long-term agreement in June.

Is the sea freight supercycle over?

According to some industry insiders, the current super cycle of ocean shipping may have ended, and it is expected that there is still room for further decline in freight rates in the second half of the year. While a number of factors are driving down ocean and freight rates, sluggish demand is becoming a common phenomenon, many freight experts said.

Affected by the severe epidemic situation last year, many U.S. traders set off multiple shopping rushes, and major retail supermarkets also stepped up stocking, resulting in a backlog of inventory, which has also largely contributed to the decline in new orders today.

Imports of consumer goods fell by about $1.5 billion in May as Americans cut back on big-ticket items like furniture and televisions, according to the Commerce Department. The National Retail Federation also projected in a report released on Friday that U.S. imports will fall from August to November compared with the same period last year.

U.S. trucking has also seen a drop in freight rates at the same time as demand for ocean freight has weakened. Spot trucking prices fell 22 percent in the first six months of this year, and prices were lower than long-term contracts in May for the first time in two years, according to data from DAT Solutions LLC, an online U.S. freight marketplace.

However, Drewry also pointed out that spot freight rates should not collapse because airlines will tighten and adjust effective supply to reduce fluctuations in spot freight rates. Over the next year, shipping lines will have to address the issue of weak spot rates that are currently lower than contract rates.

In fact, although container freight rates have fallen sharply, they are still much higher than pre-pandemic levels. The spot price for a container shipped from China to the U.S. West Coast on July 6 was still more than four times higher than it was during the same period in July 2019, according to data from online freight marketplace Freightos. Shipping congestion has also led to high transportation costs on some routes.

Gavin Kahn, president of Carbochem Inc., an importer of activated carbon used in water treatment and food processing, said it charged $16,000 per standard container for shipments from China to Chicago in June. That fee is down from last year's peak of $21,000, but still three times more than what he paid before the pandemic.

"We need to look for container rates that may be below $10,000 so that we can get close to our pre-pandemic levels to remain competitive," he said.

Previous：1:1! The euro falls to parity against the dollar, hitting a new low in nearly 20 years​
Next：Freight rates continued to drop, and 76 voyages were cancelled! Port congestion slows rate drop