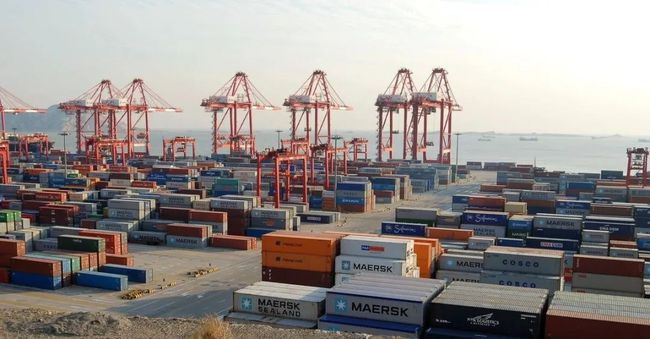 There are currently more than 40 container ships waiting to unload and call at the port, and 150,000 containers are already waiting for shipment in German ports, and the strike will further exacerbate this congestion. Check out what's happening in cross-border logistics this week.

According to DPA, on June 9, the German Union Service Union (Ver.di) called on thousands of employees at German seaports to conduct a warning strike. Ongoing labor negotiations between Ver.di and the Central Association of German Seaport Companies (ZDS) are expected to exacerbate further delays at German and even European ports.

About 5,000 workers are on strike at the German port of Hamburg alone, with major delays expected in the loading and unloading of ships in the coming days, reports said.

In addition to the Port of Hamburg, evening work arrangements at the German ports of Emden, Bremen, Bremerhaven and Wilhelmshaven were also affected by the strike. Ship handling is expected to be significantly affected as around 70% of port workers in Germany are union members.

According to a customer notice issued by Crane Freight Logistics, according to German media reports, there are currently more than 40 container ships waiting to unload and call at ports, and 150,000 containers are already waiting to be loaded at German ports, and the strike will further exacerbate this congestion.

The "Container Logistics Monthly Report" released by Container xChange, a container leasing and trading platform, pointed out that in May this year, the average price of global containers rose for the first time month-on-month. The average price rose 15% to $4,410 from $3,800.

“We expect a surge in container volumes on the trans-Pacific route, which will help improve vessel utilisation on this route, and we will see spot rates surge in the upcoming peak shipping season.”

Get a sea freight quote

Roeloffs expects container prices to surge in the short-term as pent-up demand for containers surges, especially given the approaching peak shipping season. But in the medium to long term, container prices will fall, container availability will rise, and container turnaround times will normalize.

Thousands of South Korean truckers have been on strike since June 7 to protest a sharp rise in fuel costs, disruptions to shipments at ports and container yards, and new risks to strained global supply chains. About 7,200 members, or about 30 percent of the solidarity union of freight truck drivers, went on strike, the Ministry of Transport said.

South Korea is calculating the economic damage from the strike, with the port of Busan, the country's largest port, reporting a sharp drop in cargo traffic.

Steel, auto and cement plants have mostly suspended deliveries due to difficulties in transporting goods. South Korean shippers have suspended cargo shipments because it is nearly impossible to secure trucks.

It is reported that the throughput of the Port of Busan has dropped sharply. On June 8, only 5,418 TEU of goods were processed, which was 75% lower than the usual level. The container yard occupancy rate was 75.2%, 5% higher than the May average.

Shipments of 70,500 tons of steel products by POSCO and Hyundai Steel, two of South Korea's largest steelmakers, were delayed.

POSCO has delayed trucking of 30,500 tons of steel products and semi-finished products and is considering enabling more warehouse space to store the goods. Hyundai Steel has completely suspended trucking of 40,000 tonnes of product per day after facing disruptions.

At about 14:00 on June 6, the "Xinmingzhou 18" ship loaded with 80 TEUs of Taizhou-made goods slowly left the 50,000-ton wharf in Damaiyu Port Area of Taizhou Port, marking the first port of Taizhou Port under Zhejiang Seaport. The foreign trade container direct flight route - Ningbo Ocean Shipping Vietnam Line was successfully opened. The starting point of the route is Taicang, Jiangsu, and the destination is Ho Chi Minh City, Vietnam. After opening, it can effectively relieve the logistics pressure of local export of goods, reduce the export transportation cost of enterprises in the hinterland, and help the stable and healthy economic and social development of Taizhou City.

Get a sea freight quote

Since the beginning of the year, Taizhou Port has firmly seized the opportunity of the official entry into force of the Regional Comprehensive Economic Partnership (RCEP), and with the support of higher-level functional departments and Ningbo Ocean, it has deeply explored foreign trade routes suitable for Taizhou and promoted foreign trade container direct shipping routes. landing.

Previous：Pinterest - a new tool for attracting traffic from independent sites
Next：The era of big data analysis: how to use Google tools to find popular products?