News
NEWS
European ports are seriously congested, and a large number of containers are piled up!

Several major container ports in northern Europe are facing severe congestion, with a terminal yard density of up to 95%, as Shanghai reopens and the peak season is approaching. Due to port congestion, Maersk and HMM recently issued a notice of voyage adjustment and port jumping on the Asia-Europe route. In addition, the port of Antwerp has suspended barge traffic.

Nordic ports have piled up empty and export containers as shipping companies cancel some scheduled sailings. In addition, thousands of containers destined for Russia that are blocked by customs also occupy a lot of space in the terminal yard. An industry source described the port of Hamburg as "sitting on a load of export containers", as were warehouses and storage areas in and around Hamburg.

In an Asia-Pacific market update released by Maersk this week, the company noted that the network of shipping routes is under severe pressure due to disruptions in European port operations. Ships experienced delays in northern Europe, affecting schedules returning to the Asia-Pacific region. The ports of Rotterdam and Bremer are the most congested Nordic ports, with numerous and ongoing disruptions resulting in excessive waiting times for ships.

Maersk issued a notice on May 31 that the bottleneck of the Asia-Europe route led to the accumulation of delays in its services, mainly due to port congestion. Therefore, the voyage of the AE1 service on the Far East to Europe route was adjusted as follows: 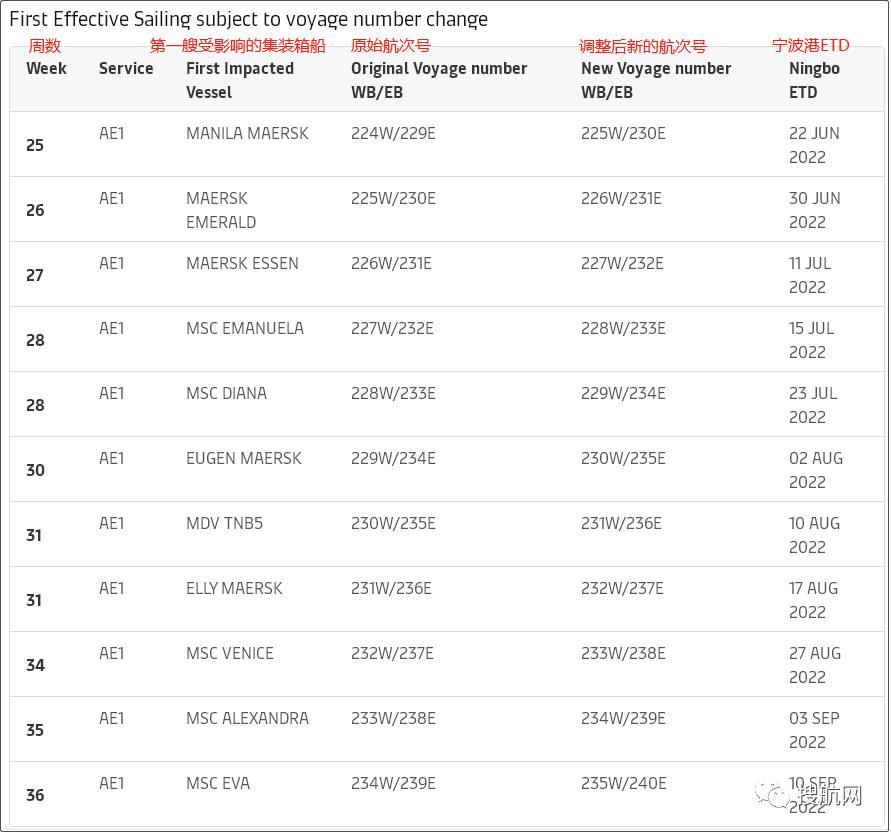 HMM also issued a notice on May 26 announcing the port-hopping plan for its Asia-Europe route.

As severe congestion at the Hamburg terminal continues, the sailing schedule to catch up with the FE3 service will inevitably cancel the call at the port of Antwerp, the notice said. The affected ships and voyages are as follows:

Note: Timetables are subject to change

Meanwhile, Hapag-Lloyd said in its latest update on operations and customer service in Europe that the yard occupancy rate at the Port of Hamburg's Altenwerder (CTA) container terminal reached 91%, mainly due to the unloading of imported heavy container ships and the It was caused by the slowdown in the pickup speed of imported boxes. Due to high yard utilization, reefer space is used as a storage drybox, limiting the maximum number of reefer plugs available.

At the PSA terminal in the Port of Antwerp, Hapag-Lloyd stated that the yard utilization rate of 869 berths was 72%, that of 913 berths deteriorated to 93%, the utilization rate of reefer plugs continued to remain at 100%, and reefer container storage to three storeys high.

In the neighboring port of Rotterdam, Hapag-Lloyd is facing similar congestion problems as Maersk. The transshipment and imported goods at the ECT terminal stayed in the yard for a long time, and the off-site storage area for storing Russian goods and long-term imported goods blocked by customs was full. In addition, the yard density of the RWG terminal has reached 95%, which is close to 40,000 TEU, the highest level in history.

Serious congestion at major ports in Belgium, the Netherlands, and Luxembourg is bad news for barge operators, with Antwerp halting barge shipments, a measure for cargoes expected to arrive between May 28 and June 30 effective. The measure will be reviewed at the end of June. With barges unable to make appointments at the terminal, truck capacity is getting tighter.

In addition, feeder operators are also suffering severe berthing delays at Nordic hub ports. A feeder operator's source said its ships typically wait four to five days after arriving at the Rotterdam and Antwerp terminals, making it impossible to dispatch. “In the past, we could easily complete a Rotterdam-Dublin-Rotterdam loop in six days with one ship; now we need to plan for nine days. That means more ships need to be deployed to maintain regular service.”

Previous：Early morning burst! How long can America last?
Next：Seize the opportunity to "cash out"? Evergreen Shipping "forcibly" passed the 60