Containers piled up on American railroad yards increase port pressureThe detention time of containers in railway yards of 11 major cities in the United States is increasing sharplyHapag-Lloyd expects the backlog in Los Angeles to continue until the end of the yearTo understand why there are more than 100 container ships waiting in line for berths from Southern California to the US port in Savannah, Georgia, it is necessary to pay close attention to the congestion of another important freight hub: the railway station.According to statistics from Hapag-Lloyd, the world's fifth largest container transport company, the average detention time of containers in 11 major railway warehouses this month reached 9.8 days. This is higher than 6.7 days in May and 5.9 days in February.Shenzhen FCL  Tax Package 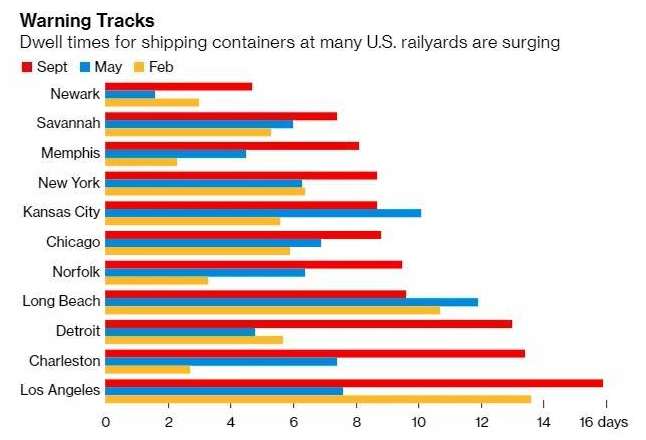 Containers piled up in American railroad yards increase port pressure. Containers piled up in American railroad yards increase port pressure.Shenzhen FCL  Tax PackageAt many railroad stations in the United States, the detention time of containers is increasing sharplyThe first to bear the brunt is Los Angeles, where containers wait an average of nearly 16 days before being picked up. Flight delays in Charleston and Detroit, South Carolina are also increasing sharply. The figures show that the situation in Kansas City has improved.Hapag-Lloyd stated in an e-mail note this week that port officials have extended business hours to evenings and weekends to ease the jamming of full and empty containers in multimodal transport. At the same time, it said that the delays in Los Angeles and Long Beach ports in particular "are expected to continue for the rest of this year."In addition to strong import demand, a large part of the problem lies in the lack of truck drivers to load and unload these 20- and 40-foot-tall containers.Shenzhen FCL  Tax Package

Previous：The most comprehensive introduction to ocean freight surcharges
Next：Heavy news! Biden announced that the two largest US ports will operate 24 hours a day, 7 days a week