41 ships! The cargo backlog at Chicago O'Hare Airport lasts for six weeks, and the congestion at the US West Port hits a new recordCongestion at the West Coast of the United States has become a well-known secret. In the past few months, the congestion of major ports on the West Coast of the United States has eased and ship turnaround times have improved. However, at present, the level of congestion has not only rebounded from the previous recovery nearly half of the time, but also set a new record.Yesterday, the two largest container ports in the west of the United States, Los Angeles and Long Beach, set a new record in the number of ships waiting to open their berths-41 ships in total.This unusually congested situation is much more serious than the port strike days in 2002 and 2004, when there were no more than 30 ships in line after a 10-day strike.

41 ships! Congestion at the US West Port hits a new record, and Chicago O’Hare Airport has a cargo backlog for six weeks!
The latest data from the Port of Los Angeles shows that 90% of the ships sail directly to anchor and join the queue. The average waiting time at anchor is 7.8 days. This monitoring data eased to 4 days in May.In addition to the skyrocketing freight rate, due to the lengthening of the delivery time of the goods, the inventory cost of the consignee has increased exponentially. But it has to increase the load in advance to ensure the inventory of the goods for the upcoming key sales seasons (such as Black Friday and Christmas).According to the current trend, the situation may worsen in the coming weeks.DDP sea shipping forwarder from china 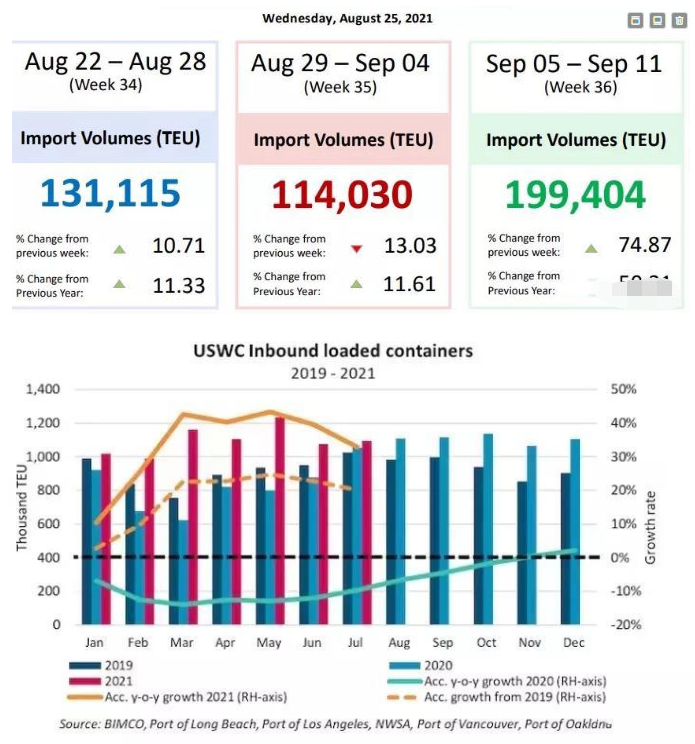 41 ships! Congestion at the US West Port hits a new record, and Chicago O’Hare Airport has a cargo backlog for six weeks!

It is reported that the O'Hare International Airport (O'Hare International Airport), a major cargo center in the central United States, is becoming increasingly congested. A freight forwarder said that it had been stuck with cargo for six weeks.Desperate logistics service providers in Chicago are adopting a series of strategies to pick up goods, including bribing warehouse personnel to secretly retrieve their goods, and even logistics companies are planning to build their own freight stations near the airport.The freight management company said that the backlog of goods is so serious that the warehouse stores rows of containers in the parking lot, and it may take up to 10 days to retrieve a batch of goods. Delivery trucks often queue for several hours for goods, and some local freight companies refuse to deliver goods from certain airlines.

41 ships! Congestion at the US West Port hits a new record, Chicago O’Hare Airport has a cargo backlog for six weeks

In the past 18 months, in order to import personal protective equipment, replenish depleted commodity inventories, and overcome disruptions in manufacturing and maritime supply chains, companies have turned to air freight, and Chicago O’Hare Airport’s cargo volume has exploded.At the same time, there is a shortage of airport staff and there is not enough space to quickly handle the mountain of cargo unloaded from the giant cargo plane.Data from the Chicago Aviation Department shows that in 2020, O’Hare Airport’s cargo volume (by weight) has increased by 14.8% to more than 2 million tons, and freighter flights have increased by 25% to 30,399. Chicago is a major cargo center in the central United States, and its international imports of wide-body aircraft have grown much faster than other large gateways.As of June this year, the number of international all-cargo flights at the airport has increased by 17.8% year-on-year, and international cargo volume has soared by 46% to 871,000 tons.

Previous：DDP 20 days receipt for hardware and tools from China to the U.S. by sea
Next：In the peak season at the end of the year, these potential explosions in the independent station